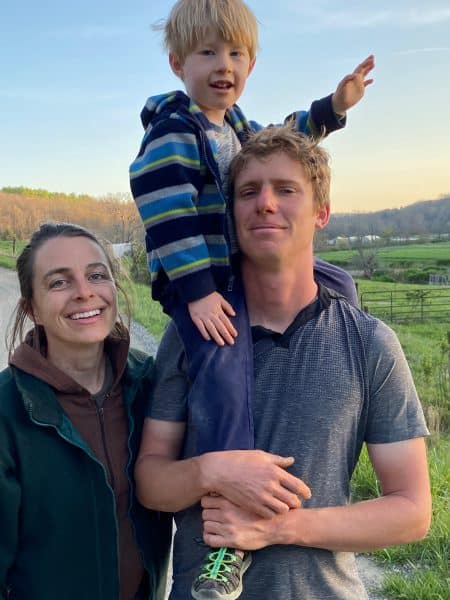 Tiffany Thompson and her husband, Alex Hessler, moved to Floyd in 2019 to operate the vegetable business at Riverstone. Tiffany and Alex share a passion for sustainable and organic agriculture. Tiffany managed the educational organic vegetable farm at the University of Kentucky for five years prior to moving to Virginia in 2016.  After 7 years as an instructor in the School of Plant and Environmental Sciences at Virginia Tech, Alex officially joined the farm full-time in 2021.  Both Tiffany and Alex hold master’s degrees in horticulture from the University of Kentucky.  They live in the farmhouse at Riverstone with their son Clay.

A center for sustainable agriculture in Floyd County

The farmland is owned by Woody and Jackie Crenshaw who bought their dream farm in 2002.  They did this for several reasons: one being a way to get their retirement savings out of the Wall Street economy and into the local economy; to a place they could see, touch, and care for it. It was also intended as the beginning of an — as yet — undefined project that they hoped would one day be useful for their community. Early on, they saw a need to restore and care for this parcel land, which had been stressed by overgrazing. The first years were spent removing the detritus built up over years, restoring the riverbanks, clearing pathways through the woodland and renewing the internal access roads. Over time, a vision emerged of an organic valley, something that could, one day, become a center for sustainable agriculture in Floyd County.

In 2009, the SustainFloyd organization began researching how to bring a new pulse of energy to local agriculture, and the time seemed right for the Crenshaws to step out and create a real working farm where ideas and strategies could be tested on the ground in real time. This thought lead the Crenshaws to approach their neighbor, an experienced organic farmer, with whom they worked to design and build a certified organic farm from the ground up. That began a three-year partnership that resulted in Riverstone Organic Farm. The Crenshaws operated Riverstone Organic Farm until 2019 when they started leasing the property to Tiffany and Alex.  Woody and Jackie remain committed to the success of the business and contribute through their Artisan Product line that can be found in our Farm Store.

Working in harmony with the natural processes around us